Guide to the Best Commercial Juicers on the Market 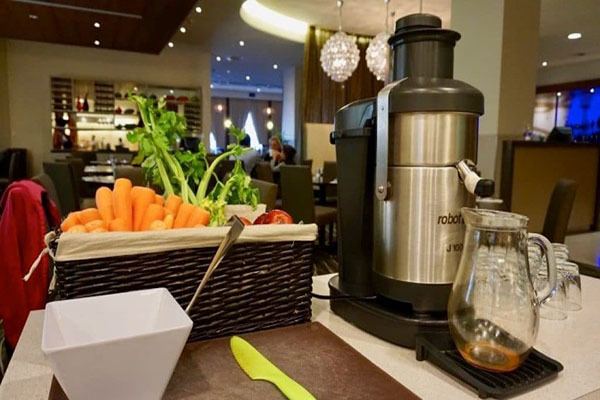 While it isn’t quite as new as you might think it is, juicing is a well-established and proven way to improve the quality, if not the quantity, of your life. Millions swear by it and have taken advantage of, and are enamored by, its many benefits and relatively few drawbacks.

Coupled with a rise of vegetarian and vegan culture, juicing has come into its own as a viable and positive nutritional way to embrace a healthier lifestyle that can also inspire its practitioners to embark on a journey that leads them directly to the world of physical fitness and greater, personal well-being.

That additional interest in juicing has led to more and more people flocking to juice bars, gyms, and fitness centers, and where there’s a demand for juice, there needs to be a way to supply it.

That’s why we’ve come up with a list of five of the best commercial juicers that’ll help your business to cater to all the juice needs of your clientele. Are you ready? Then let’s start juicing…

In a hurry? Our Top Choice

Wherever there’s a demand for juice, you’ll find the Nutrifaster Multi-Purpose Juicer. Mooted as the world’s number one juicing choice for juice bars, gyms, health clubs, and fitness centers, the Nutrifaster is a centrifugal juicer that’s built to last and keep on juicing long after its rivals have thrown in the towel.

It owes its reputation to the fact that it doesn’t know the meaning of the word quit. And that, thanks to being fashioned from aluminum and stainless steel, it’s juicing power is only surpassed by the way it looks.

Once it gets going, the Nutrifaster will juice whatever fruits and vegetables you want it to for nearly three-quarters of an hour before it needs to power, and cool, down for fifteen minutes. And while it’s resting? That’ll provide you with all the time that you’ll need to clean and prepare it to start juicing all over again.

Easy to disassemble and put back together, the Nutrifaster is designed to make your juicing journey as easy as it can be.

Using two different blades, a cutter and a shredder that are forged from surgical grade stainless steel, the Nutrifaster is a juicing monster that, thanks to its automatic pulp ejector, will keep on juicing for the duration of its operational cycle.

And during that cycle, and while you’re busy feeding it fruit and vegetables, it’ll produce a quarter of a gallon of juice a minute.

When it comes to size, brands don’t get much bigger than Hamilton Beach, a globally recognized giant in the field of food preparation. So, it’s no wonder that their premier commercial juicer, the Otto was made to produce more juice in less time than most of its rivals. Size really does matter.

Crammed full of juicing innovation, the Otto uses a high capacity induction motor to reduce its volume level and a dual-fan cooling system to keep it juicing for longer and reduce the amount of time that it needs to spend cooling down.

It’s made to keep the juice flowing and keep you safe and that’s exactly what it does thanks to its automatic overheating prevention system that’ll never let it get too hot and a lid that can’t be opened while the Otto’s blade is still cutting, slicing and dicing. And the easy to use controls?

They’re completely waterproof and sealed, which makes them easy to wipe down and prevents any juice or pulp clogging or damaging them.

Even though it’s feed and waste tubes aren’t as large as the Nutrifaster’s, it’s ability to run continuously for longer periods means that it produces a similar volume of juice at a slightly more reasonable cost.

And the fact that it’s easier to take apart, clean, and reassemble means that the Otto is just as good, if not better than its main competition.

Faster doesn’t always mean better, and Vitalisci Slow Masticating Juicer serves a testament to that, all too often, overlooked fact. While it lacks the pace and punch of the previous entry’s on our list, the Vitalisci does have an ace up its sleeve. Like all slow juicers, the quality of the juice it produces is superior to the tear it up as quickly possible juicers we’ve already mentioned.

Running at around forty revolutions per minute, the Vitalisci is a quiet, studious juicer that focuses on the task at hand and doing what it does best. And what is does best, is making high-quality juice from a wide variety of fruit and vegetables.

Using three different sized sieves to filter and remove the pulp and extraneous matter that other juicers just can’t rid of, the Vitalisci can be set, by using a combination of its filters, to produce pure or pulpy juice according to your tastes.

With a wide, top-loading feed tube and easy to clean disposal system, the Vitalisci might be slower and quieter than most juicers but isn’t exactly a slouch when it comes to making juice. And it can do something that other juicers can’t. It can make ice-cream.

So, in those moments when you just want to throw caution to the wind and indulge in a little of what you fancy, you can turn to the Vitalisci and it’ll give you all the help you need to satiate your sweet tooth. 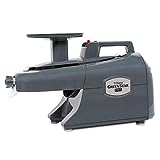 For thirty years, Tribest has had one mission. To make healthy living easier for everyone and they have dedicated their all to making this goal a reality.

They have, in that time, become leaders in their chosen field, and thanks to its precision design and engineering, the Greenstar Pro is wildly acknowledged as being one of the leading, must-have commercial juicing machines.

Made to maximize the quality of the juice it produces, the lower temperatures that govern the operation of the Greenstar’s twin stainless steel, bio-ceramic gears preserve the enzymes of the juice and give it a longer shelf life.

While it takes a little longer to prepare fruit and vegetables for the Greenstar, that extra time is worth it as the end result is, according to the juice people who understand these things on a level that most of us never will, outstanding.

A high-quality juice machine that prepares juice slowly and with care, the Greenstar has been made with simplicity in mind. It’s easy to operate, easy to take apart and put back together, and even easier to clean. And it also makes some of the best juice that you’ll ever taste.

The last choice on our list goes back to basics. It’s an old-fashioned, tried tested and true juicer that puts its faith entirely in citrus fruits.

A hand pressed operated juicer, it’s a mechanical device that relies entirely on the human equation to work and while it isn’t as swish, fancy, or sophisticated as the other juicers that we’ve talked about, it does what it does well and at the end of the day, that’s all that matters.

It just needs a flat surface and a strong pair of hands to operate it. You slice your citrus fruit up, put it in the strainer cup, push down on the handle and it does the rest. While it isn’t suited to any fruits outside of the citrus family, it isn’t meant to be an all-purpose juicer and is a perfect way to explore the world of commercial juicing in an affordable manner.

And as for the volume of juice, it’ll produce? That’s entirely dependent on you. The faster you can cut and squeeze, the more juice it’ll make. Sometimes the old ways really are the best ways.

Before you think about plowing your hard-earned cash into a commercial juicer, there are a couple of salient points that you should be aware of, and familiar with,  that might help you to decide which machine you want. So let’s take a quick look at them.

Simply put, juicing is a method of extracting the natural juice from fruit and vegetables. It is the easiest way to prepare, and consume, a large amount of produce in a relatively short amount of time.  While juicing most commonly refers to the extraction of said juice, it is also used to describe the way in which said juice is consumed or drunk.

There are a number of ways to “juice” fruit and vegetables – either via a small, mechanical hand press which is solely dependent on being physically operated, an electrical household machine that uses blades and gears to grind, pulp, and pulverize fruit and vegetable to extract their juice, or a much larger commercial machine that uses the same principles as household machines, but on a much larger scale.

What is a Commercial Juicer?

A commercial juicer is a machine designed to be used in an establishment such as a juice bar, gym, or fitness center that needs to produce a higher volume of juice to cater to the needs of your client base.

Because it’s designed to be used in a commercial environment, it should have the appropriate certification that specific state law requires, and as the owner of any establishment using a commercial juicer, the onus will be on you to ensure that it complies with any, and all, local regulations.

That said, as a board guideline, commercial juicers should be certified by the following bodies and organizations – NSF (National Sanitary Foundation), ETL (Electronic Testing Laboratory), UL (Underwriters Laboratory) and, if you intend to use your commercial juicer anywhere in the European Union, the CE (Conformity European) and it should have also have a valid RoHS (Restriction of Hazardous Substances) permit.

Commercial juicers fall into food broad categories – Masticating, Triturating, Centrifugal, and Citrus juicers. The type of juicer you need is entirely dependent on what you require it for, and want it to do. High volume, high turnover demands that you use a Centrifugal juicer as they’re designed to produce a lot of juice in a short amount of time.

Better quality and lower turnover are more suited to masticating or triturating juicers as both are made to focus and concentrate on quality than quality. But if you just want a simple orange or lemon juicer to add a little pep to your bar, then you’ll only need to invest in a citrus juicer.

What are the benefits of Juicing?

It’s a perfect way to consume a lot of fruits and vegetables quickly. A primary source of vitamins and minerals, the more fruit and vegetables you have in your diet, the healthier, generally speaking, you’ll be.

Used in conjunction with a properly planned diet or fasting regime, juicing can also help with weight loss and can, in certain cases following proper advice, be used to ease, and control, the symptoms of certain medical conditions.

Which Commercial Juicer Should I Buy?

That, as we’ve already mentioned is entirely dependent on what you require it to do and want it for. Do you want a high volume, high production rate machine? If that’s what you need a juicer to do, you’ll need a centrifugal machine like the Nutrifaster.

A high quality, lower volume machine? If that’s the case, then you’ll need a masticating or triturating juicers like the Tribest Greenstar. Or do you just need a way to serve your clientele tasty, citrus-based fruit drinks? Then look no further than the Jupiter XL Citrus Juice Press.

Whatever you need it to do, there’s a commercial juicer on our list that’ll cater to all of your demands and do everything you need it.