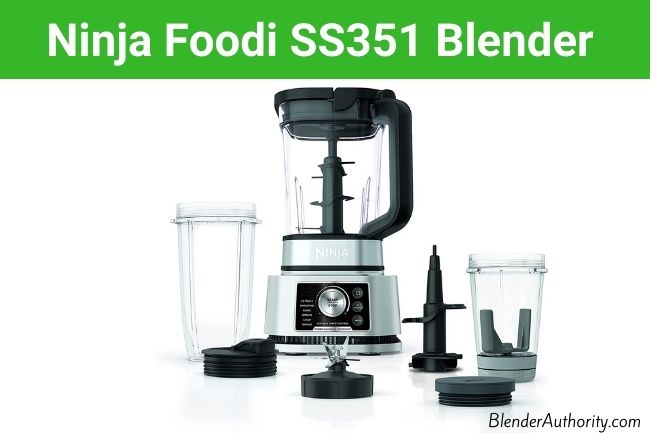 I first reviewed the innovative Ninja Foodi HB152 Hot and Cold blender in 2019. Ninja has added to their Foodi blender product lineup recently with the popular SS351 model which they call the “Ninja Foodi Power Pitcher System”

Ninja has introduced a LOT of blenders over the years and they switch up the same model across multiple retailers to give each retailer an exclusive Model SKU #, so its can be confusing to buyers who are trying to research a specific Ninja blender model.

For the Foodi Blender lineup, the main blender model is the SS351 Power Blender which I review below. Later on in this post I explain how this blender compares to the other models in the product line. 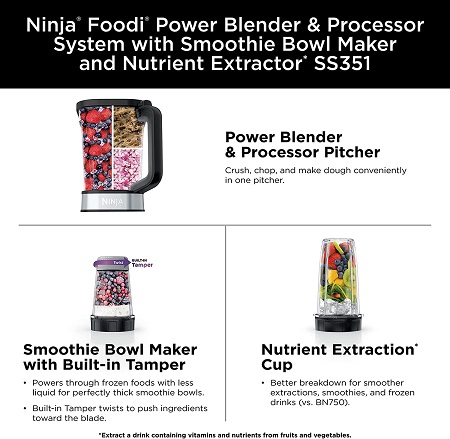 The 24 ounce extraction cup is the same design as their popular Nutri-Ninja cups which is great for making single-serve smoothies, dips, dressing, and small batch recipes.

The 14 ounce smoothie nutri bowl uses a paddle type of blade mounted on the top which is ideal for blending recipes that involve stopping/starting to scrap thick recipes like making nut butters.

The Auto-IQ program technology has been used for years by Ninja on their other blenders and it is a set of blending functions that pulse, blend, and pause in a series of pre-set cycles to evenly process or puree the ingredients. A timer will count down and the blender will stop automatically when the Auto IQ program is completed.

The available preset programs will adjust depending on which container you are using.

Variable speed control dial features 11 speeds if you want more control over what you are blending and don’t want to puree the ingredients.

The 72 ounce pitcher uses the same “Total Crushing” blade design as their past blender models. It works fine at chopping and pureeing large batches. It is awesome at crushing ice.

The 14 ounce nutri bowl is a really nice new addition for Ninja (they didn’t have anything like this with prior blender models) and is great for making thick recipes like smoothie bowls or nut butters. You just turn the blade manually while the blender is on to move the thick ingredients around within the jar.

The 24 ounce Extraction cup has been around for years and is excellent for single-serve smoothies. It blenders very well and creates a smooth consistency. 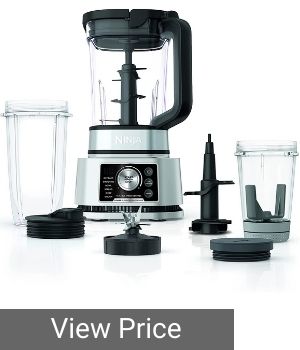 Positives: The 1400 watt peak motor is plenty of power for most blending needs. The new Nutri smoothie bowl is a nice accessory for thick recipes. The user reviews are very high for this blender and it continues to be a best seller.

Negatives: The blender is made with mostly plastic so it not designed for heavy duty use. It is loud like many blenders with similar motors.

Overall Opinion: The Ninja SS351 Power Blender is a good blender for the average consumer who wants a powerful, versatile blender for a reasonable price.

The 72oz Pitcher and Nutri Ninja cups and blades are the same design as their prior models but the new Nutri Bowl is a great new accessory.

Ninja SS351 vs Other Blenders

The Ninja Power Blender and Processor SS201 is the same blender as the SS351 that I reviewed in this post but the SS201 has different accessories.

The difference is that the SS201 adds in a dough blade but does not have the 14 ounce smoothie bowl maker or the 24 ounce single-serve extractor cup/blade.

Other than the difference in accessories, the SS201 blender has a different control panel to reflect that it only comes with one container.

The Ninja CO351B blender is created exclusively for Costco. Compared to the SS351, the differences in the CO351B is it has a slightly larger 18oz smoothie bowl maker and a less powerful 1200 motor.

Otherwise the two blender models are the same.

The SS101 Foodie smoothie bowl maker uses a less powered 1200 watt motor and doesn’t come with a large 72 ounce pitcher. It comes with the same 14 oz smoothie bowl container and 24 ounce extraction cup as the SS351 but the SS101 adds in an extra 24 ounce cup.

The SS101 is smaller with less controls than the SS351 as it is designed for smaller recipes.

Overall, the SS101 is less-powerful than the SS351 as it is designed for use with small containers. The SS101 is fine if you just want to make single-serve smoothies, smoothie bowls, small batch recipes and don’t need a full size pitcher.

It also features upgrades like a Digital display control, feeder chute lid, and food processing blades for grading and chopping.

The SS401 is worth the extra money versus the SS351 if you will be using the food processing accessories. Otherwise the SS351 offers similar blending performance and accessories as a lower price.

I have reviewed a lot of Ninja blenders over the years and this model offers similar performance as Ninja’s past countertop blenders but has some nice updates.

It offers a lot of performance and functionality for the price and has strong customer reviews.

Overall, it is a great blender for the average consumer that wants a blender for smoothies, crushing ice, pureeing ingredients, and making the occasional pizza dough or nut butter.