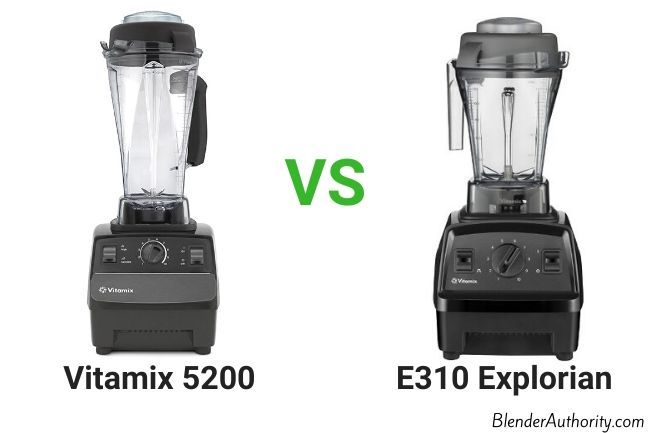 Part of the ‘Explorian’ Series, the E310 Blender from Vitamix has a 48 ounce, BPA-free container that provides you with ample room for creating a variety of smoothies, soups and other recipes in the kitchen.

Powered by a 2HP motor, the three inch, hardened stainless steel blades make short work of blitzing and pulverizing their way through even the toughest ingredients, and are even capable of crushing ice, making this blender ideal for making iced coffees, slushies and margaritas!

The E310 also features a total of 10 variable speed controls, far exceeding that of most other blenders, as well as a pulse function. This variety gives you ultimate control over what you’re creating, and ensures that you’ll get a super-smooth consistency each time you use it.

These speed controls are also really easy to use thanks to the easy to read dial design, and the on/off toggle that is conveniently located on the front of the blender helps you ensure that the blender cannot be accidentally operated before you’re ready.

It’s incredibly easy to clean thanks to it’s amazing self-cleaning function. Simply drop a little dish soap into the blending jug, top up with water and switch the machine on. This takes all the hard work out of scrubbing away at it, and is also a much safer way to clean as there’s no risk of you accidentally cutting yourself on the super sharp blades.

There is also a specially designed tamper included with this blender, which allows you to push down into the liquid and add more ingredients without having to stop the machine and take the lid off. The tamper also helps the blender process thicker, stubborn blends without needing to scrape down the sides.

The E310 is the most affordable full-size Vitamix blender and offers the same motor and power as the 5200. The shorter 48oz container is a great size if you are looking to mainly make smoothies and want the ability to store it under a kitchen cabinet.

The 5200 blender from Vitamix is part of the ‘Legacy’ series and is arguably the best selling model of all time. It offers the same horsepower and blending performance as the Explorian E310 but with a slightly heavier build quality and larger 64 ounce pitcher.

This gives you an additional quarter of the capacity you get from the E310 and gives you the opportunity to create larger batches of food, making it ideal for families and for commercial use.

One of the most impressive features of the 5200 is it’s ability to create hot soup from cold ingredients! This is achieved by the blades spinning fast enough to create friction heat, which in turn cooks the ingredients as it blends them, and can give you a bowl of steaming hot soup in as little as six minutes.

The blades themselves are constructed using hardened, aircraft-grade stainless steel and are powerful enough to liquidize even the toughest of ingredients. They are also laser cut, which doesn’t only make them super sharp but also means that they are resistant to dulling or bending, giving you consistent results for years to come.

The blending container has been specially designed to fold the ingredients back down into the blades as they blend, which prevents them from sticking to the side and ensures a fast blend that is super smooth in consistency.

You’ll also receive a specially designed tamper that can be used to feed extra ingredients into the blender as it processes, and allows you to assist with thicker blends without having to take the lid off and scrape the sides down.

The controls of the 5200 are slightly different than the E310 as it has a high/variable toggle switch compared to the E310’s pulse toggle switch. The 5200 has 10 variable speed controls and a pulse function, that provides you the versatility to create a wide variety of recipes and gives you ultimate control over the consistency of your blend.

All in all, there aren’t many differences when comparing the Vitamix E310 vs 5200, however you’ll find that the 5200 is able to blend both small and large batches compared to the E310 which makes it ideal for bigger families food prep tasks.

Below, we’ve outlined the main differences between the two, which will help you find the best option for your individual needs.

With each blender being so closely matched in performance and features, it’s almost impossible to say which one is the best, and personal preference is definitely something that is going to come into play.

The 5200 is the proven winner in most blending tests compared to other brands and the larger 64oz container is really useful for soups and larger recipes.

However, with the Vitamix E310 is cheaper and able to provide you with more or less the same quality of blend as the Vitamix 5200, it would definitely be a better choice for anybody on a budget.

Vitamix 6500 Blender Review – How did we rate this model ?

How to use Nutribullet as a Food Processor